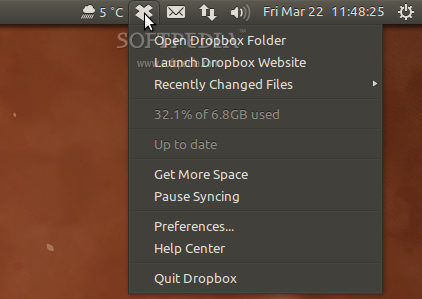 The official Dropbox client for Linux, designed to let users share and store their files online

Dropbox is a free graphical application that lets users to browse and upload files that are stored on their Dropbox account. Dropbox, as a company, is a free and commercial file hosting service. These days, storing files on a cloud service is no longer the subject of science-fiction books, as there are numerous companies that offer such services, and Dropbox happens to be one of the first of its kind to deliver a Linux client.

With Dropbox, you will be able to sign in and access your files from any web browser or mobile device. Sharing files with your friends and family is just two clicks away, as well as viewing your photos in a gallery. The bad thing about the Dropbox client for Linux is that new and inexperienced users have no idea that the downloads offered on the official website for Ubuntu, Debian and Fedora Linux distributions are very old (version 1.6.0 at the time of writing this short review), while the latest version is 2.x.

Moreover, installing the Dropbox client for Linux happens to be quite overwhelming for new Linux users, especially if it involves the Linux Terminal, as suggested on the official homepage. Following the command-line instructions provided on the Dropbox for Linux page will download a version from the 2.x branch, but not the latest release. So our suggestion is to install Dropbox from your Linux distribution’s default software repositories.

Once installed, the client will automatically start on the next reboot (if installed properly) and it will ask users to login into their Dropbox account. The client will create a folder on your Home directory where it will download all the files that are stored on your Dropbox account. It works just like any other folder on your computer, but with a few differences: no complicated interfaces to learn, runs in the background, and syncs your files automatically from your computer to the web, mobile and vice versa.

As far as we know, Arch Linux is the only distribution to offer the latest version of the Dropbox client for Linux. So we suggest to install a user-friendly Arch Linux-based operating system, such as Manjaro, if you want to enjoy the features brought by the latest Dropbox releases